“People are the nucleus of any organization. So, how can you find, engage and retain top performers who’ll contribute to your goals, your future?”

There is no dearth of Enterprise Resource Planning (ERP) systems utilized by human resource companies, however, the inclusion of machine learning to such ERP systems can be very useful. This leads one to ask the following question.

To develop a predictive model to understand the reasons why employees leave the organization.

This report has two objectives, namely;

i. To conduct an exploratory data analysis for determining any possible relationship between the variables

ii. To develop a predictive model for identifying the potential employee attrition reasons.

A systematic data analysis was undertaken to answer the business question and objective. 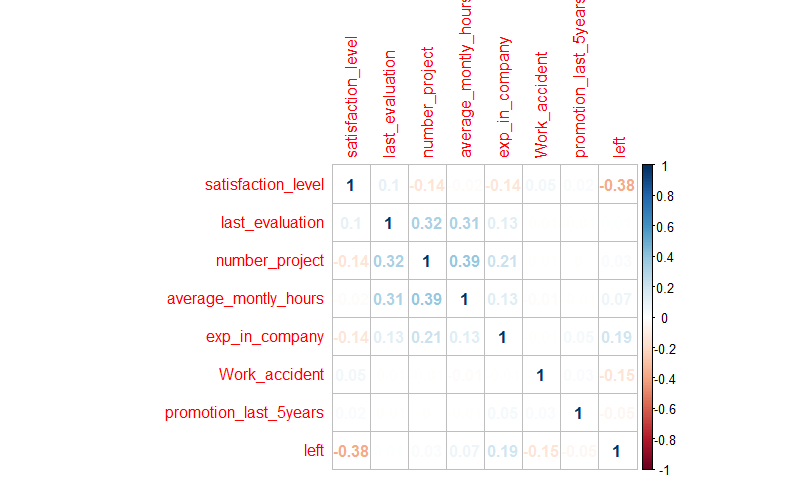 c. The company had an employee attrition rate of 24%

d. The mean satisfaction of employees was 0.61

e. From the correlation plot shown in Fig-1, there is a positive (+) correlation between projectCount, averageMonthlyHours, and evaluation. Which could mean that the employees who spent more hours and did more projects were evaluated highly.

f. For the negative (-) relationships, employee attrition and satisfaction are highly correlated. Probably people tend to leave a company more when they are less satisfied.

g. A one-sample t-test was conducted to measure the satisfaction level.

1.1. Null Hypothesis: (H0: pEmployeeLeft = pEmployeePop) The null hypothesis would be that there is no difference in satisfaction level between attrition and the entire employee population.

1.2. Alternate Hypothesis: (HA: pEmployeeLeft!= pEmployeePop) The alternative hypothesis would be that there is a difference in satisfaction level between attrition and the entire employee population.

I then conducted a t-test at 95% confidence level to see if it correctly rejects the null hypothesis that the sample comes from the same distribution as the employee population.

From the above findings does not necessarily mean the findings are of practical significance because of two reasons, namely; collect more data or conduct more experiments.

h. Now let’s look at some distribution plots using some of the employee features like “Satisfaction”, “Evaluation” and “Average monthly hours”.

Summary: Let’s examine the distribution on some of the employee’s features.

Here’s what I found:

i. The relationship between Salary and Attrition 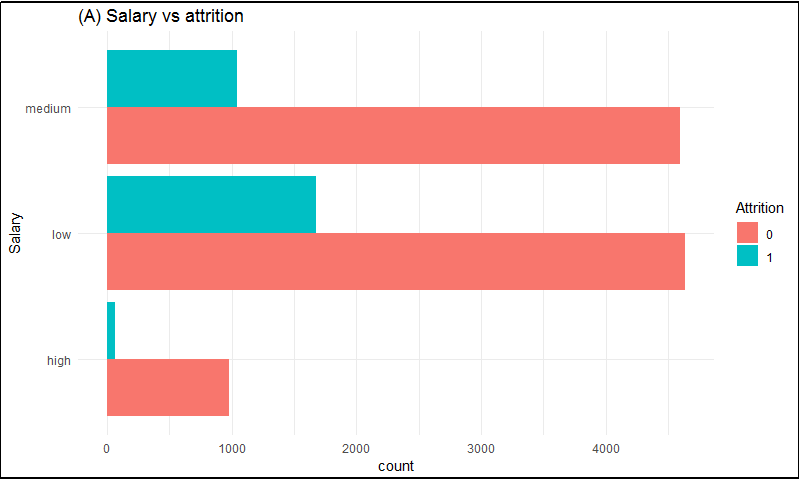 j. The relationship between Department and Attrition 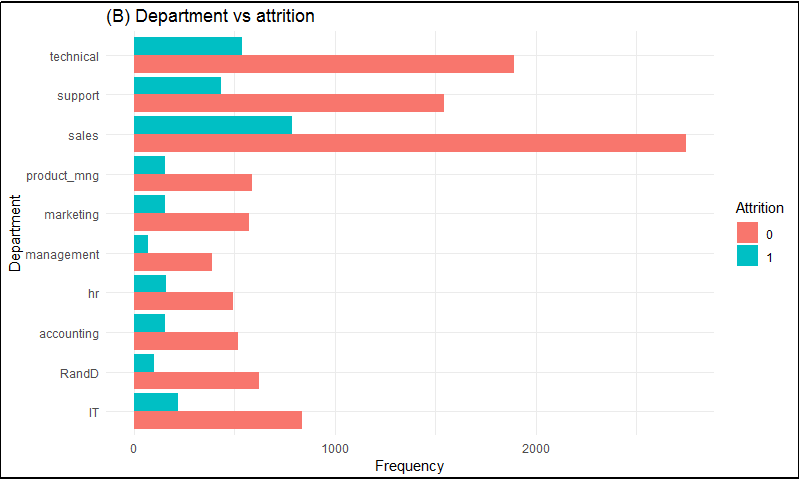 k. The relationship between Attrition and ProjectCount 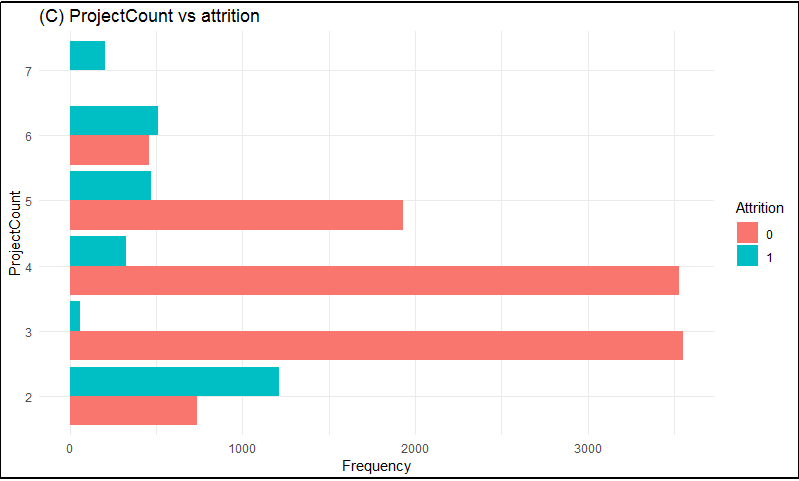 l. The relationship between Attrition and Evaluation 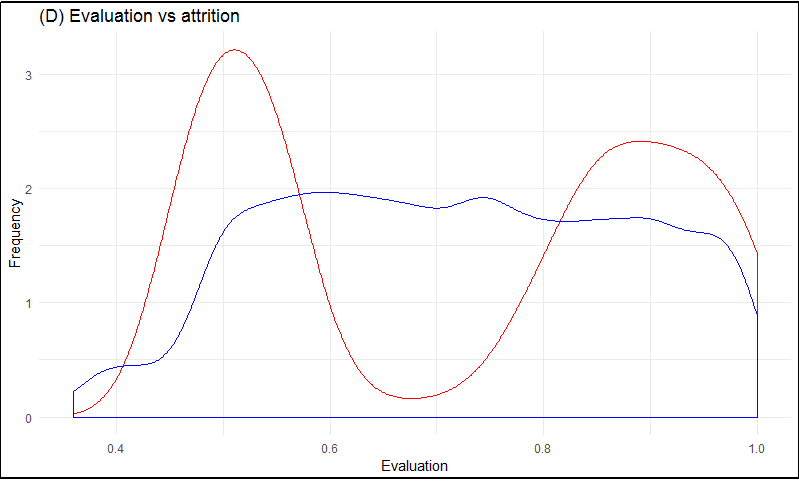 m. The relationship between Attrition and AverageMonthlyHours 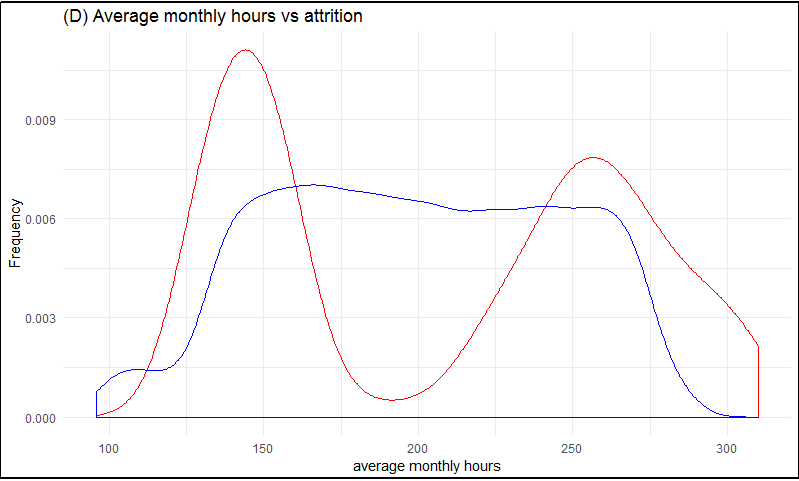 Key Observations: The Fig-7, clearly represents the factors which serve as the top reasons for attrition in a company: 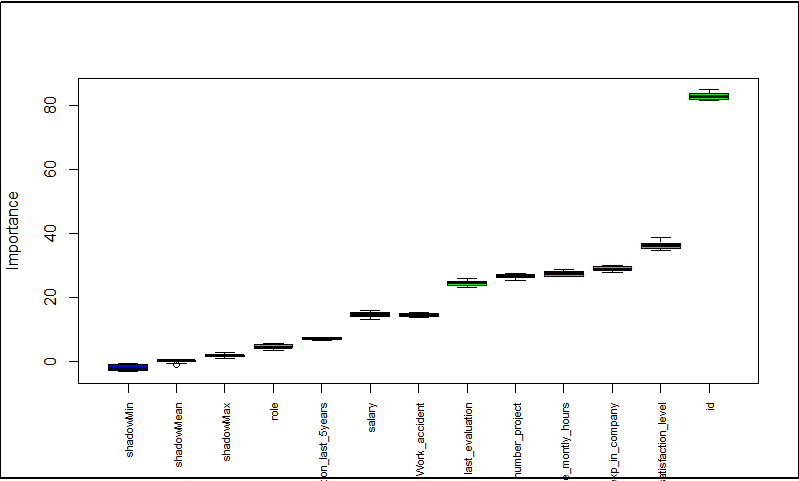 Base model rate: recall back to Part 4.1: Exploring the Data, 24% of the dataset contained 1’s (employee who left the company) and the remaining 76% contained 0’s (employee who did not leave the company). The Base Rate Model would simply predict every 0’s and ignore all the 1’s. The base rate accuracy for this data set, when classifying everything as 0’s, would be 76% because 76% of the dataset are labeled as 0’s (employees not leaving the company). The training data was split into 75% train set and 25% validation set. An initial logistic regression model based on all 10 independent variables (or features) was built on the train set. The model was tested on the validation set. An initial predictive accuracy of 78% was obtained.

Thereafter, I built four models based on the following classifiers, namely:

a. Classification And Regression Trees (CART),

The CART, SVM and the KNN model gave an accuracy of over 98% on the training set. I chose the CART and the SVM model for testing. Both models yield an accuracy of 95.5% on the validation set, as shown in Fig-8.

From Fig-8, I chose the cart model as the final model. Thereafter, I tested this model on the hr_attrition_test data. Finally to conclude using the cart modeling technique, we can predict the employee attrition at an accuracy of 95.5%.