Historically there have been several instance of air plane crashes. This study is an attempt to explore the possible causes of such air crashes, and to determine if air travel is a safe option.

The objective of this study are two fold, namely;

a. To perform an Exploratory Data Analysis (EDA) to determine the common cause/reason of airplane crash, countries with maximum/minimum airplane crashes, fatalities vs survived ratio and any other interesting trend.

b. To develop a Predictive Model (PM) to determine the following;

A systematic data analysis was undertaken to answer the objectives.

Both datasets were dirty. Several data management tasks were carried out to clean the data. As per a researcher Wickham, H. (2014), tidy data is a dataset where each variable is a column and each observation (or case) is a row.

As the common adage goes, “a picture is worth a thousand words”. Once the data was cleaned and composed in a tidy format, it was ready for visualizations. Data visualization helps in determining possible relationship between variables. In Fig-1 & Fig-2, I show the common reasons for air crash sorted by descriptions and words. In particular, air crash during take offs are maximum, see Fig-1.

i. Visualizing the common reasons attributed to air plane crash 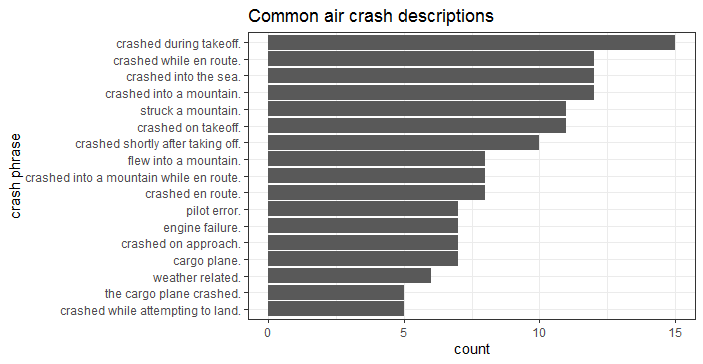 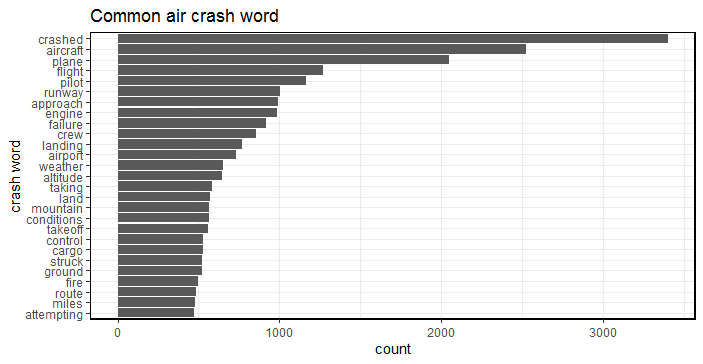 A majority of the flight operators are US-military, AirForce, Aeroflot, Air France and Luftansa, as seen from Fig-3. 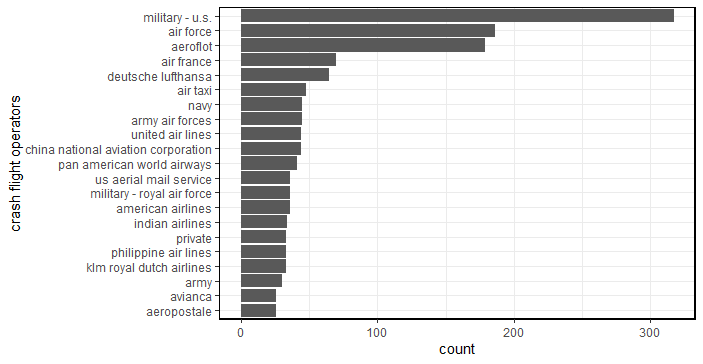 The peak of air crash survivors was in year 2000, see Fig-4. Probably the reason could be because of better aircraft’s compared to yesteryear’s. 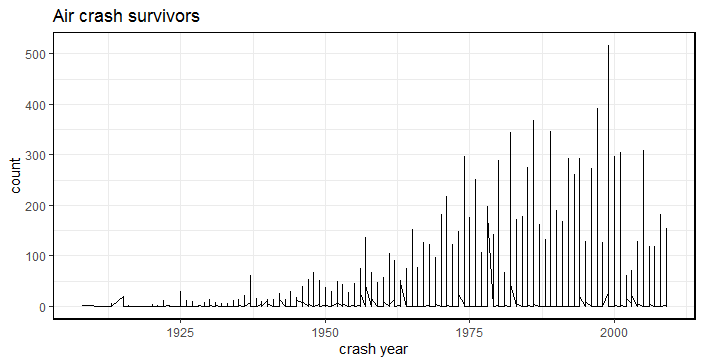 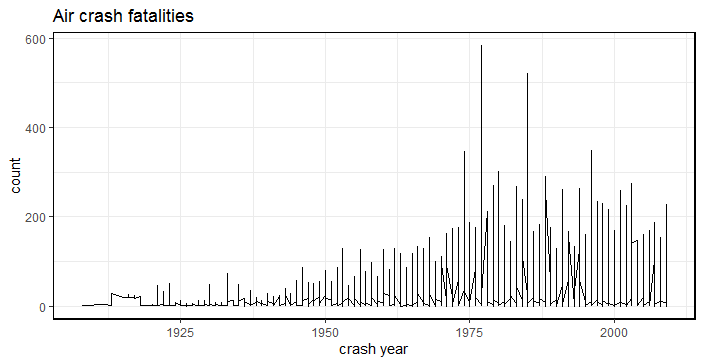 vi. Is there a relationship between civilian air crash year and crash reason

I plotted this relationship and found the following: 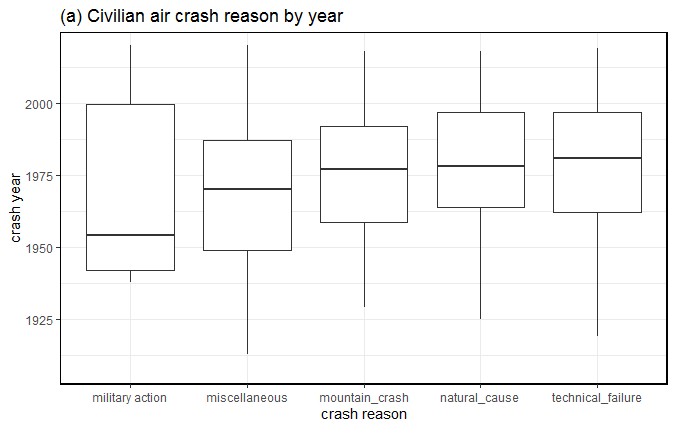 vii. Is there a relationship between civilian air crash month and crash reason

I plotted this relationship and found the following: 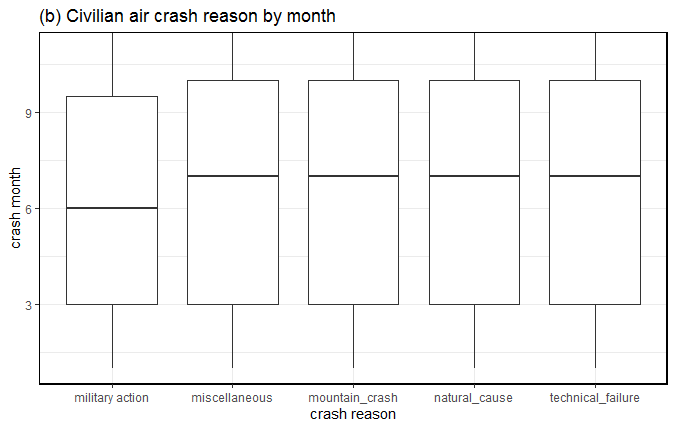 viii. Is there a relationship between civilian air crash fatalities and crash reason

Although the median for civilian air crash fatalities normally centered around 1-5 people, but there were several outlier values too. For instance in one military action induced civil aircraft crash took the life of all 290 people aboard. This incident occurred in 1988 at 10:55pm over the Persian Gulf, near Bandar Abbas in Iran. The Airbus A300B2-203 bearing registration number EPIBU was shot down by an US Navy vessel USS Vincennes by a SAM (surface to air) missile. See Fig-8. 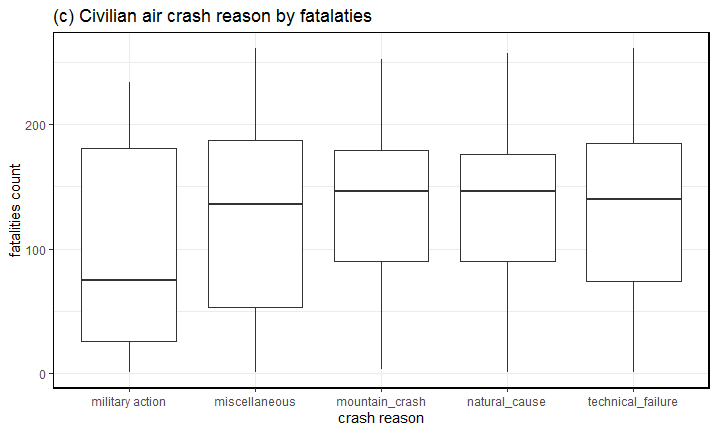 NZV is a property wherein a given variable has almost zero trend, i.e. all its values are identical. I found two such variables in civilian aircraft crashes. They were, “ground” & “crash operator type”. I removed them from further analysis. I also removed the summary variable. At this stage, the data dimension for civilian air craft crash since year 2010, was 205 observations in 21 variables (includes both original & derived variables)

There are two types of missing data:

For this analysis, I’m assuming the data is MCAR. Usually a safe minimal threshold is 5% of the total for a dataset. For a given variable, if the data is missing for more than 5% then it’s safe to leave that variable out of analysis. Basis of this assumption, I found the following variables, Crash_hour, Crash_minute, Flight, Crash_route_start, Crash_route_mid, Crash_route_end, Fuselage_number, with more than 5% missing data.

In building a predictive model, it’s always advisable to account for correlation. It is a statistical term that measures the degree of linear dependency between variables. So variables that are highly correlated to each other are deemed to be non-contributors to a given predictive model. In Fig 9, I show the correlation plot for continuous variables. For instance, the variable aboard and fatalities have a strong negative correlation. 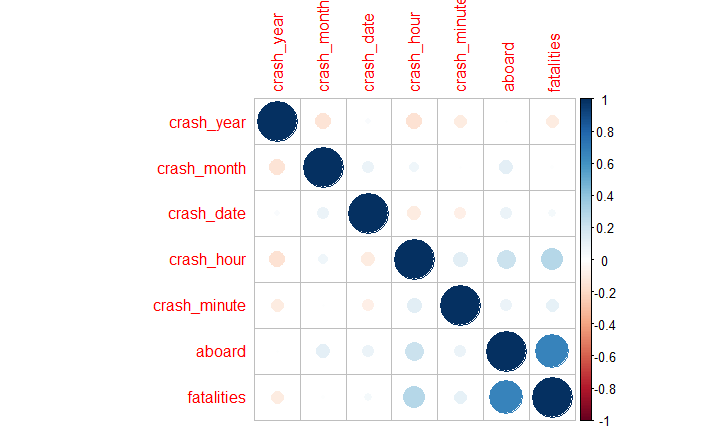 To treat the correlation, I have applied an unsupervised dimensionality reduction and feature selection approach called the Principal Component Analysis (PCA) for continuous variables, and the Multiple Correspondence Analysis (MCA) for the categorical variables. In Fig-10, I have shown relevant principal components (PCs). Notice the red horizontal line in Fig 10 (B). This red line indicates the cut-off point. Therefore the continuous variables namely, “aboard, fatalities, crash minute, crash month, crash date, crash year” are deemed relevant for further analysis. 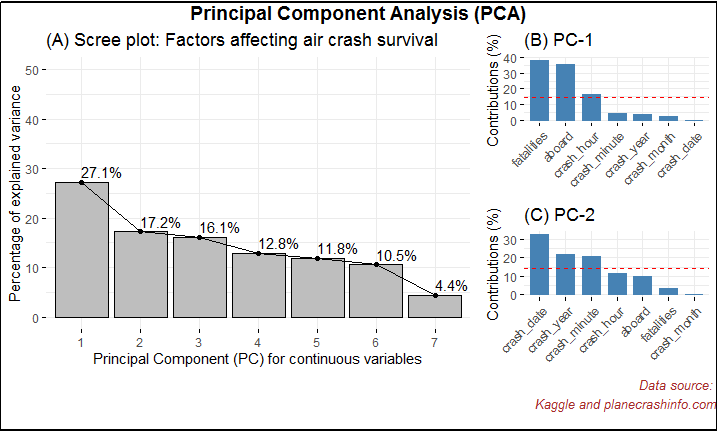 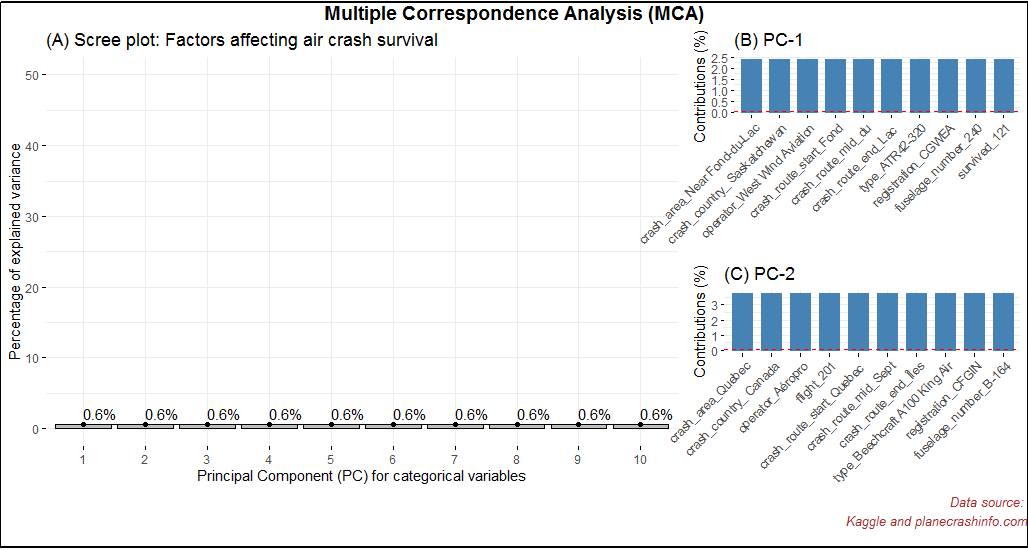 By this stage, the data dimension for air craft crashes since 2010 was reduced to 205 observation in 7 variables.

The derived variable survived was continuous in nature. For a classification task, I coerced it into categorical with two levels. If there were 0 survivors, then I coded it as “dead” and if there were more than 1 survivor, it was coded as alive and saved it as a variable called crash survivor.

I found that in 205 complete clean observations, the proportion of dead was 63% and that of alive was 37%. This indicated that the outcome/dependent variable crash survivor was imbalanced. If this anomaly is left untreated, then any model based on this variable will give erroneous results. An imbalanced dataset refers to the disparity encountered in the dependent (response) variable.

Therefore, an imbalanced classification problem is one in which the dependent variable has imbalanced proportion of classes. In other words, a data set that exhibits an unequal distribution between its classes is considered to be imbalanced. I split the clean dataset into a 70/30 % split by 10-fold cross validation. The training set contained 145 observations in 7 variables. The test set contained 60 observations in 7 variables. The 7 independent variables are, crash year, crash month, crash date, crash minute, aboard, fatalities and crash survivor.

i. Methods to deal with imbalanced classification

With under-sampling, we randomly select a subset of samples from the class with more instances to match the number of samples coming from each class. The main disadvantage of under-sampling is that we lose potentially relevant information from the left-out samples.

With oversampling, we randomly duplicate samples from the class with fewer instances or we generate additional instances based on the data that we have, so as to match the number of samples in each class. While we avoid losing information with this approach, we also run the risk of over fitting our model as we are more likely to get the same samples in the training and in the test data, i.e. the test data is no longer independent from training data. This would lead to an overestimation of our model’s performance and generalization.

Besides over- and under-sampling, there are hybrid methods that combine under-sampling with the generation of additional data. Two of the most popular are ROSE and SMOTE. 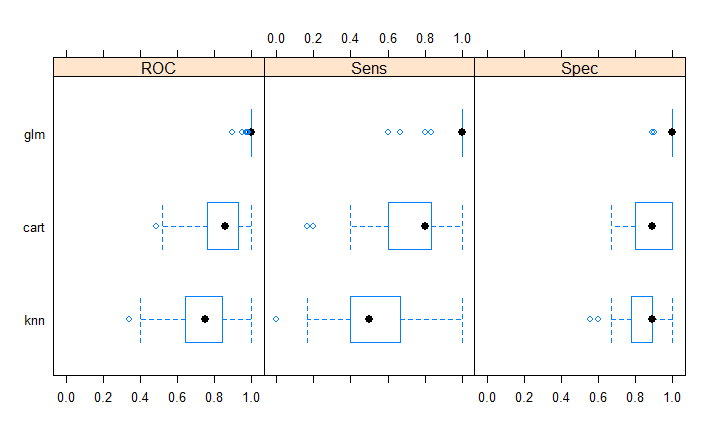 I have shown below the predictive modelling results on imbalanced dataset.

From the result above, its evident the sensitivity of CART and GLM model is maximum.

I balanced the dataset by applying under, over sampling method as well as the ROSE method. From the results shown in above, I picked the logistic regression model to train on the balanced data. As we can see now, the sensitivity for over and under-sampling is maximum when applied the logistic regression algorithm. So I chose, under sampling for testing the model. See Fig-13 and the confusion matrix results are shown below. 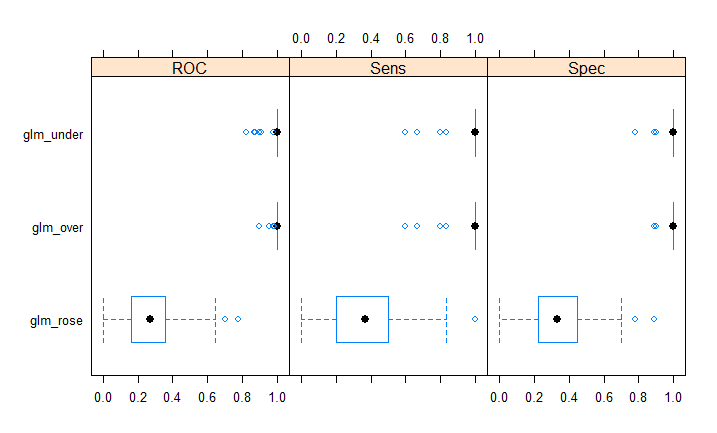 After balancing the data and reapplying a logistic regression algorithm, the accuracy to predict the air crash survivor accuracy reduced to 98%, as shown in confusion matrix below.

In answering the second objective of this analysis, it’s been found that the logistic regression model gives 98% accuracy in determining the accuracy of an air crash survival. This explains the need for balancing the dataset before modeling.

Perhaps, one of the challenges on working on this dataset was the higher number of categorical variables. And each such variable having more than 10 distinct levels. Decomposing them into a smaller number of meaningful levels would require help from a subject matter expert. Besides this, the dataset contained a huge number of missing values in categorical variables. Imputing them would be bottleneck to the primary memory. I replaced the missing values with Zero.

There can be an argument on the necessity of data balancing. For instance, in this analysis I have shown that imbalanced data give 100% accuracy, in contrast the balanced data accuracy reduces to 98%. The reasoning here is, balanced or imbalanced data is dependent on distribution of data points. By balancing the data, the analyst is absolutely certain about the robustness of the model, which would not be possible with an imbalanced dataset.

Traveling by air is certainly a safe option in present times. I have proved this claim by conducting a systematic rigorous data analysis. Moreover, the logistic regression model trained on balanced under-sampled data yield the maximum sensitivity.

In this study, I have analyzed the last 101 years data on air craft crashes. I have shown in my detailed analysis that given certain factors like crash year, crash month, crash date, crash minute, aboard, fatalities and survived, it’s possible to predict the accuracy of air crash survivors. I have tested several hypothesis in this work, see section C. It would be interesting to see trends between aircraft type and air crash fatalities which I leave as a future work.

The R code for this study can be downloaded from here